My time in Berlin was very intense and shaped my outlook on the world. While I want to write about my time in Berlin in a schedule format to show that it is possible to see a ton in just 2 days, I also want to present my thoughts on Berlin in the most cohesive way possible. This post is the first in my three-post series “2 Days in Berlin”. Please check out my other two posts on my time in Berlin, “Lessons From Berlin: Always Potential for Peace and Violence” and “The Art of Berlin: Museum Island (+Food)”, especially the former, which details my reflections on my visit to the Memorial to the Murdered Jews of Europe and my tour of the city.

The second I hopped off the (rather confusing) metro, it hit me that the Berlin sky is so blue it looks like it has been photoshopped. Großer Tiergarten is not just a home to some of Berlin’s most treasured monuments – it boasts truly majestic natural beauty.

The first thing I saw was the Berlin victory column. At 67 meters tall (200 feet), the column can be seen from a fair bit a way and is definitely Großer Tiergarten’s flashiest piece. It was designed in 1865 by Heinrich Strack to commemorate Prussia’s victory in the Danish-Prussian War. By the time it was completed, Prussia had also won the Austro-Prussian War and the Franco Prussian war (those Prussians must have made great neighbors). The Prussians couldn’t keep up with their own victories so they basically said, “hey, this statue can just commemorate the past few things we won.”

There seemed to be a (beautiful) monument to a different German historical figure or time period at every corner. Most of the memorials were dedicated to men, and the slightly critical feminist in me wondered how history would have played out if women had been equipped with the tools to play a larger role in shaping it. I will acknowledge, however, that many of these memorials were to military leaders, so the uneven balance is at least partially understandable.

One of the most fascinating monuments in the park was the Soviet War Memorial. When the Allied-Powers (UK, France, USA, and USSR) took over Germany in 1945, the USSR immediately erected a memorial to the 80,000 Soviet soldiers who died in the Battle of Berlin. 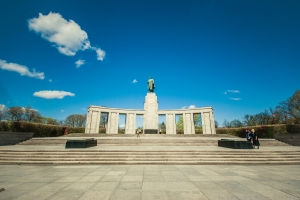 While Berlin was divided amongst the four major Allied Powers, the Soviet Memorial was constructed within the British sector with the permission of the other three powers. During the Cold War, the Soviets maintained control of the memorial and their guards paraded in front of the monument in strictly capitalist-controlled West Berlin.

I wandered through the park a bit more, coming across a few more interesting statues before I  found the Reichstag, which houses the German parliament, was completed in 1884 and used until 1933 when it was destroyed in the Reichstag Fire. T

he Nazis used the fire, the causes of which are still unknown, as a pretext to suspend many of the rights stipulated in the Weimar Constitution in order to track down the communists they declared responsible. The building was not used during the Cold War, when East and West Germany met in separate parliaments in their respective sides of the city. The Reichstag building was the sight of German Reunification Ceremony in 1990, and subsequently restored as the meeting place of the German parliament. Today, the portion of the building in which the house of parliament meets has a glass dome ceiling (clearly glass-ceilings have different connotations in Europe). Citizens of not only Germany, but also of countries around the world, are allowed to observe the parliament from this dome, which is supposed to represent transparency in government. If the members of the parliament ever get too self-absorbed, they can look up and see who is the source of their power – American backpackers in their twenties (I think the actual answer is the German people). Entry is free, but you are required to register in advanced.

The next few hours were incredibly thought provoking and shaped my perspective of the world. Please read my piece “Lessons from Berlin: Always Potential for Peace and Violence”.