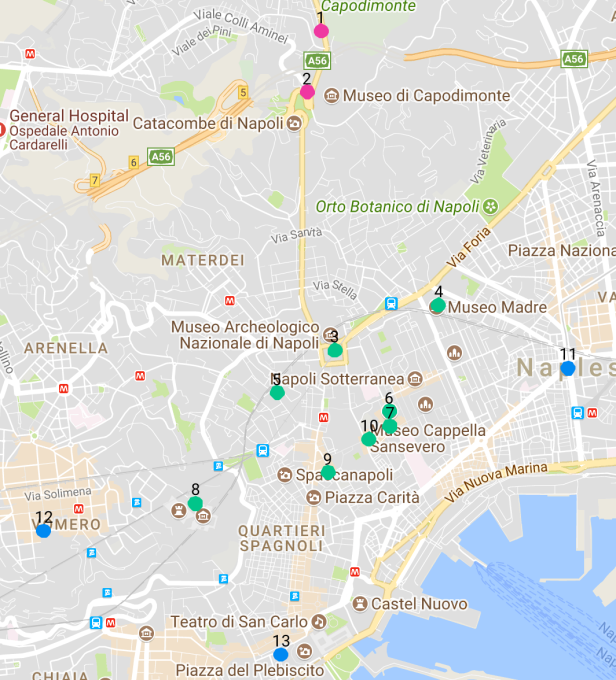 Make the most of your time visiting Naples! I’ve curated this list of the top 13 attractions in Naples, Italy grouped by proximity.

“Museo di Capodimonte is an art museum located in the Palace of Capodimonte, a grand Bourbon palazzo in Naples, Italy. The museum is the prime repository of Neapolitan painting and decorative art, with several important works from other Italian schools of painting, and some important ancient Roman sculptures.”

“The Naples National Archaeological Museum (Museo Archeologico Nazionale di Napoli, MANN, formerly Real Museo Borbonico (“Bourbons’ Royal Museum”)) is considered the most important Italian archaeological museum and one of the most important in the world for classical, and particularly ancient Roman, archaeology. Its collection includes works of the highest quality produced in Greek, Roman and Renaissance times and especially Roman artifacts from nearby Pompeii, Stabiae and Herculaneum.”

“Hermann Nitsch (born 29 August 1938) is an Austrian avant-garde artist who works in experimental and multimedia modes. Born in Vienna, Nitsch received training in painting when studied at the Wiener Graphische Lehr-und Versuchanstalt, during which time he was drawn to religious art.”

“The anatomical machines (Italian: macchine anatomiche) are a couple of anatomical models reproducing the human circulatory system, exposed in the Cappella Sansevero in Naples. Realised in the second half of the 18th century, they are built on top of a couple of human skeletons, a male and a female.”

“Domenico Fontana (1543 – 28 June 1607) was a Swiss architect of the late Renaissance, born in today’s Ticino. He worked primarily in Italy, at Rome and Naples.”

“Gesù Nuovo (Italian New Jesus) is the name of a church and a square in Naples, Italy. They are located just outside the western boundary of the historic center of the city.”

“The National Museum of Ceramics Duca Di Martina … is a historical and artistic site situated inside of the Villa Floridiana Park … in Naples, Italy. The building used to be one of Campania’s Bourbon royal residences and since 1927 this residence has hosted the museum.”

“Daniela Ciancio (born 5 March 1965, Naples, Italy) is an Italian costume designer, noted chiefly for her film costumes. In 2005, she won the David di Donatello for Best Costumes for her work on the Antonietta De Lillo film Il resto di niente.”

*Anything in quotes is from Wikipedia.